Historic Perspectives on the Art of Landscape Design

Registration is required for this event. To register and pay via credit card, please use our online form. You will be sent zoom link close to the class time; be sure to download Zoom app.

The history of landscape design is a story of how humankind has shaped the land to reflect ideas and cultural values. It is a story that involves religion, politics, art, philosophy and technology. It is also a story about our changing attitudes toward nature.

Join Rodney as he explores historical contexts that have influenced what we have come to recognize as major stylistic expressions in the art of landscape design. 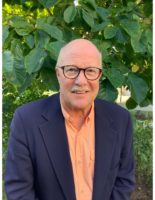 Rodney Robinson’s  passion for landscape architecture began at the University of Delaware where he studied design under noted landscape architect Conrad Hamerman. Hamerman invited Rodney to work during summers at his studio in Philadelphia. While there, through Hamerman’s international connections, Rodney was exposed to diverse projects and world-renowned landscape architects and artists Roberto Burle Marx, Isamu Noguchi and Buckminster Fuller.

In 1995, Rodney founded the firm Rodney Robinson Landscape Architects, Inc. and continued to expand his design practice in both public and private gardens.  His work took him from Florida to Nantucket to Chicago. Over the next twenty-year period, the firm increased its diversity of expertise to include conservatory design and historic landscape restoration.   Notable commissions included conservatory designs for Reiman Gardens at Iowa State University, Lewis Ginter Botanical Garden in Richmond, Virginia, and such important historic gardens as Gibraltar Gardens and The Nemours Mansion and Gardens, both in Wilmington Delaware.  Rodney stepped down as principal of his firm, Robinson Anderson Summers. Inc., in 2018.

Since 2013, Rodney has taught courses in landscape architecture at the University of Delaware.