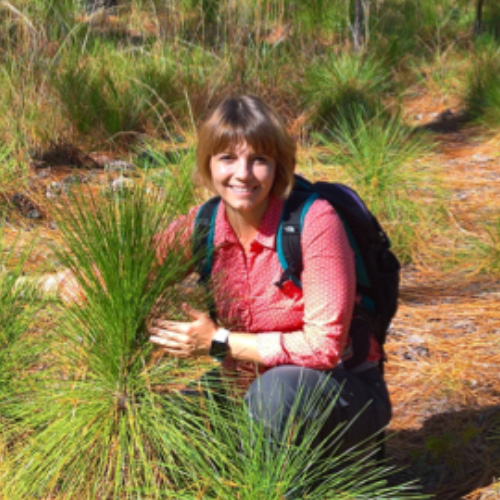 Cat Meholic realized she wanted to pursue a career in horticulture after spending most of her early college years renovating her parents’ yard. Previously a biology major at the University of Delaware, Cat switched her major to horticulture after her summer internship at UDBG. The following summer she accepted a summer internship at The Polly Hill Arboretum in Martha’s Vineyard, which introduced her to curatorial work at a public garden. Cat also interned at Chanticleer during her undergraduate years which expanded her knowledge of the design and maintenance of public gardens. In 2010, she applied to Mt. Cuba’s Plant Records Internship, later becoming a full-time Plant Recorder after graduation.

Her interest in an advanced degree, a career in curation, and a desire to work for UDBG and her previous mentor Dr. Frett prompted Cat to apply to the Curatorial Assistantship. She completed her thesis on the witchhazel family, including a detailed report of around 120 species in the family and 300 cultivars (see above download). Her other projects included contributing articles to UDBG’s publications, creating plant labels, inventorying plants, revamping plant descriptions for UDBG’s website,  writing additional plant groups for the website, and a detailed report on tree measurements to use as a measure of the value of UDBG’s collection. Beyond her assistantship at UDBG, Cat led Women in Horticulture, a non-profit group she co-founded that provides networking events for women in the field.

Besides her extensive educational and professional experience, Cat has also participated in wild collecting trips which has increased her plant knowledge and appreciation of the importance of wild-collected material. She has traveled to Alabama, Georgia, South Carolina, North Carolina, and Kentucky to collect a wide range of plants. In addition to the processes and laws that apply to the collection of plants, she has learned about the ecology, culture, and animals of the places she has visited. Several of the exciting animals she witnessed in the wild included fire ants, copperheads, alligators, and feral hogs who were eating the acorns the group set out to collect.

After graduating from the University of Delaware in the summer of 2019, Cat accepted a position as Curatorial Horticulturist at Ambler Arboretum at Temple University in Pennsylvania where she oversees its plant collection. A couple of her first tasks were to write a Collection’s Policy and administer the transition of existing records into a database. She also manages the naturalistic garden areas including the Woodland, Wetland, Cottage, and Healing gardens.